The idea of this project is to build a vacuum cleaner ‘module’ for Thymio II.

The challenge is to find or build the proper parts so as it is as simple as possible, and in the idea to challenge everyone interested, to submit and test code that would allow Thymio II to cover a room as fast as possible, making only usage of the integrated sensors and features of Thymio II.

NB : The challenge goes beyond the scope of the initial thoughts that are described, the parts made hereafter need to be changed, the suction system is too poor at this stage, and needs a  replacement (probably based on cyclone separator) as it sucks only very tiny dust, the current system induces turbulence in the dust container (fluid dynamics) and thus not ready for prime time.
I’m working on it and testing but any proposal is welcome 🙂

So for this, let’s start with the ‘making’

Thymio II has of course the possibility to be extended with Lego parts. As there are some constraints I decided to also use 3D printed parts, as well as, of course, some other parts for aspiration

I designed the 3D printed parts with FreeCAD 014. I used FreeCAD because it is off-line (not a Cloud solution which would need permanent Internet connection), and because I used it before, thus know it a bit, and also because it is multi platform (Windows, OSX, Linux).

The parts where made with the ‘Parts’ module of FreeCAD, only using primitives with fusions and cuts. It’s quick and dirty, and an expert would probably do much better. 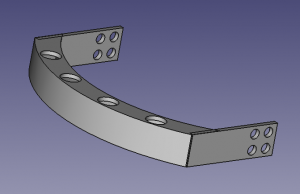 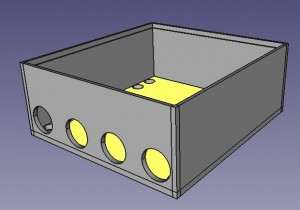 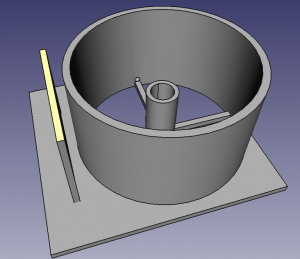 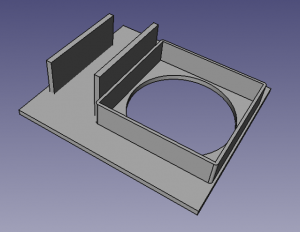 I printed these parts with my Solidoodle 2 3D printer. It’s not the best today but works fine for the purpose. You might have to use a 5mm diameter drill to ‘rework’ the Lego holes, depending on how precise the 3D printer is

For the Lego part I tried to make it simple and easy to remove.

Once assembled with the other parts, the whole vacuum cleaner module can be easily removed from Thymio II as one piece.

I used LDD (Lego Digital Designer) to generate the assembly instructions and list of needed Lego bricks. You can of course use other bricks to have the same result if you don’t have the bricks listed. 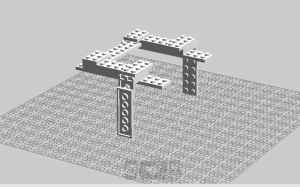 I used a flexible pipe to ‘connect’ the front aspiration part to the dust container as seen on picture.

This can usually be found in pet shops where you can buy aquariums, I used 4 pipes, 13 cm long and with a diameter of 10 mm

This is probably the most challenging part. The Suction system is mounted on the top cover of the dust container. It is made by a ventilator/motor/turbin and a battery pack. I tested several ones, but at this time the performance is still poor. Depending on the aspiration surface, type of engine and rotor, as well as the motor power, the results vary a lot, there are unwanted side effects. Furthermore, as adding a filter will even more reduce the suction, I may have to develop a ‘cyclone’ system. 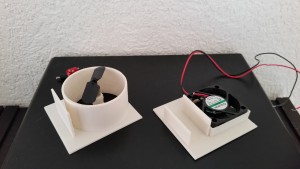 The code is another big thing. The current tests base on the Thymio II ‘Explorer’ mode (yellow). I will probably base the code on it and adapt it. It will be an interesting challenge to write optimal code so as Vacuumio covers as much as possible of a room as fast as possible. 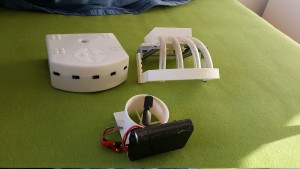 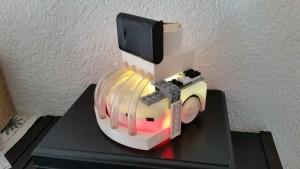 And here is a first video  :

Thanks for your interest, Alain Tuor